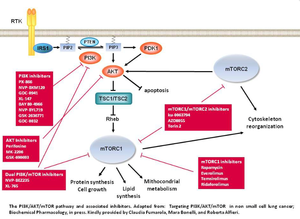 The growth and dissemination of tumor cells is determined by various alterations in genes encoding for proteins involved in the control of cell growth, proliferation, differentiation and cell death. In this contest, a key role is played by the pathway of PI3K/AKT/mTOR and alterations of the components of this pathway are involved in the pathogenesis of many human tumors (1).

The members of the family of PI3K are activated by signals from membrane receptors and act by generating the lipid messenger PIP3 (phosphatidylinositol-3phosphate) from membrane phospholipids. PIP3, in turn, mediates the activation of different protein kinases. Among them, AKT plays a key role in the control of various cellular functions; it activates the metabolism by stimulating glycolytic enzymes and regulating the transport of glucose, promotes cell survival and cell cycle progression, and inhibits apoptosis. Moreover AKT, through the inhibition of the complex TSC1/TSC2, mediates the activation of mTORC1. mTOR is a serine-threonine kinases that form two distinct complexes, mTORC1 and mTORC2, upon binding with different regulatory proteins (2). mTORC1, by integrating the signals coming from the extracellular environment with the energy state of the cell, controls cell growth and proliferation, promotes the biosynthesis of proteins, lipids and cellular organelles and inhibits autophagy. Furthermore, both mTROC1 and mTORC2 complexes as well as PI3K are involved in the processes of rearrangement of the cytoskeleton, and in the control of the migratory and invasive capability of tumor cells (3).

The hyperactivation of PI3K is reported with high frequency (up to 60%) in different types of cancer (breast, endometrium, colon, lung and gastric cancer) and can be due to activating mutations or amplification of the PI3KCA gene (4). In addition a frequent oncogenic alteration is the loss of the tumor suppressor gene PTEN (phosphatase and tensin homologue), which encodes for an enzyme that catalyzes the conversion of PIP3 to PIP2, therefore inhibiting the activation of the pathway. In contrast, mutations of AKT and mTOR occur with very low frequencies, and their hyperactivation, frequently found in many tumor types, is due to alterations of upstream components of the pathway such as PI3K, Ras and growth factor receptors.

There are a number of ongoing clinical trials evaluating the effect of these drugs alone or in combination with chemotherapy, hormonal therapy or other targeted agents. The impression that emerges from both preclinical data as well as from completed clinical trials is that these compounds exhibit reduced efficacy when used as monotherapy, while they seem to be very effective in combination with other agents (4).