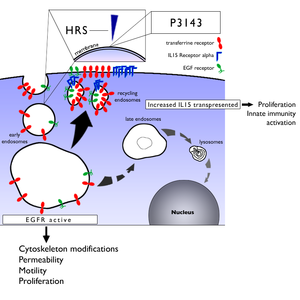 In the intestine and, particularly, in enterocytes, nutrients are modulators of various cellular functions and may be involved in tissue immune response and inflammation (1). Dietary proteins are often incompletely digested by the intestinal proteases and residual peptides can have biological effects (2). An example of an inflammatory and remodelling response of the intestine to poorly digested proteins is the intestinal lesion found in celiac disease (CD), which is induced by gluten – a gliadin-containing alimentary protein present in wheat and other cereals. CD is a genetic condition characterized by inflammation due to the adaptive and innate immune response (with IL-15 as a major mediator of the innate immune response), and structural changes resulting in the remodelling of the small intestinal mucosa with an inversion of the differentiation and proliferation compartment leading to villous atrophy and crypt hyperplasia (3).

Investigating the early events of CD, particularly the interaction between undigested gliadin peptides and intestinal epithelial cells, has unveiled the critical role of protein trafficking in the pathogenesis of the disorder. It has been found that the so-called gliadin “toxic” peptide (P31-43) shares a sequence homology with the hepatocyte growth factor regulated substrate kinase (HRS), a key mediator of endocytic maturation. P31-43 localizes on the endocytic membranes and delays vesicle trafficking by interfering with HRS-mediated maturation of early endosomes in cells and enterocytes. Consequently, by altering the trafficking of vesicular compartments, P31-43 induces at least two main effects. One effect is that it delays the maturation of endocytic vesicles with consequent reduced decay of the epidermal growth factor receptor (EGFR). The delayed degradation of EGFR induces, in turn, several different biological effects, including proliferation (4,5,6). The other effect is that by affecting the re-cycling compartment, P31-43 increases the trans-presented IL-15/IL5R alpha complex, an activator of innate immunity, with consequent remodelling of the celiac mucosa and activation of the innate immune response (7, 8) (Figure 1).

These observations are paramount in understanding the mechanisms underlying the early events occurring in the celiac mucosa exposed to gliadin, being the increase in IL-15, IL-15R alpha and proliferation of crypt enterocytes two major events implicated in the initial phases of CD.

From a general point of view, it is interesting to note that peptides from gliadin, a very common alimentary protein, can have several metabolic effects owing to their ability to interfere with important cellular functions, including those regulated by the endocytic pathway. However, it still remains to be established why P31-43 and other undigested gliadin peptides have such a peculiar effect on the celiac intestinal mucosa and whether they can also be dangerous for the non-celiac intestinal mucosa. A current working hypothesis, corroborated by preliminary observations, is that undigested gliadin peptides have the same effect in controls and CD patients. However, whereas in controls these effects are somehow overcome, in celiac patients the endocytic pathway is altered, thereby rendering cells more sensitive to the effect of P31-43 on endocytic maturation (9).

P31-43 interferes with the correct localization of HRS to the membranes of the entocytic vesicles, inducing two main effects: a) it delays the maturation of early to late vesicles; b) it increases the recycling  pathway.

The delay of vesicle maturation reduces the degradation of EGFR and of other tyrosine kinase receptors with consequent increased proliferation and other biological effects. The increased recycling of IL15R-alpha, trans-presents more IL15 on the cell membrane with consequent activation of the innate immunity.