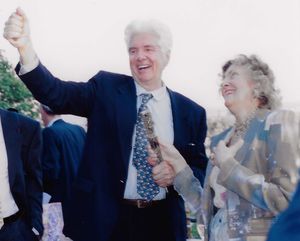 Günter Blobel with his wife, Laura Maioglio in 2001, on the occasion of the festivities in Dresden for his 65th birthday

Günter Blobel, one of the founding fathers of Cell Biology, died in New York City on February 18th, at the age of 81. Günter discovered how short aminoacid sequences within polypeptide chains act as signals to direct proteins to their proper locations within the cell. For this work he was awarded the Nobel Prize in Physiology or Medicine in 1999.
Günter was born in the small Silesian village of Waltersdorf in the Eastern part of Germany (now part of Poland). In 1945, he and his family fled their home to escape from the advancing Russian army and settled in Freiberg (then in the DDR). Günter later studied Medicine in Western Germany but, after earning his degree from the University of Tübingen, realized (in his own words) that he “was much more fascinated by the unsolved problems of medicine than by practicing it” (1). This realization spurred his decision to enroll in the graduate program at the University of Wisconsin-Madison where, in 1967, he obtained a PhD under the mentorship of Van Potter.

During his years as graduate student, Günter’s research was mainly concerned with the relationship between the two populations of polyribosomes in eukaryotic cells, those free in the cytosol and those associated with the Endoplasmic Reticulum (ER). To unravel the functional relationships between these two populations and the mechanisms underlying the association of ribosomes with the cytoplasmic face of the ER, he joined, as postodoctoral fellow, the group of George Palade at the Rockefeller University in New York. Günter remained at the Rockefeller University for the rest of his life, progressing through the tiers of Academic positions to full professorship in 1976.

Shortly after his arrival at Rockefeller, Günter teamed up with David Sabatini, who shared his interests. Colvin Redman, a former postdoctoral fellow in the Palade lab, had just demonstrated that ribosomes attached to the ER membrane synthesize different proteins from those translated by the free population, more specifically that the synthesis of secreted serum proteins occurred on attached rather than free ribosomes of rat liver (2). The burning question that this work opened was the nature of the information that drives populations of polyribosomes translating different proteins to different locations within the cell. During the many discussions on this problem, Günter and David, on a purely intuitive basis, generated the idea that the information for segregation of the two polyribosome populations might reside in the nascent polypeptide chain itself, rather than in biochemical differences between the translating ribosomes, or in direct docking of a subclass of mRNAs to the ER membrane. They furthermore postulated that the information might be encoded in a “signal peptide” at the N-terminus of the nascent polypeptide that would be removed after translocation into the ER lumen. Although there was initially no experimental support for this idea, Blobel and Sabatini described the model in a short review published in 1971 (3). The idea was, however, upgraded to an hypothesis by the finding of Cesar Milstein et al. in 1972, that Immunglobulin light chains are synthesized in cell-free systems with an N-terminal extension, which is not present in the mature product, nor in the product of cell-free translations carried out with rough microsomes rather than with isolated mRNA (4). Günter was greatly excited by Milstein’s results, and resolved to directly demonstrate the signal hypothesis.

The years 1972-73 brought about changes for the Cell Biology group at Rockefeller University: in 1972, David Sabatini moved to the NYU Medical School, where he chaired the Cell Biology Department for the next four decades; in the following year, George Palade moved with a large part of his group to Yale. Günter chose to remain at Rockefeller, and to pursue his work on the signal hypothesis there. The challenge was to set up a complete cell-free system, which would recapitulate the cellular phenomenon of recognition of the nascent chain of a secretory protein by the ER membrane and its translocation across the lipid bilayer. At the time, this was a formidable task. With the help of one postdoctoral fellow, Bernhard Dobberstein, and with outstanding determination and perseverance, in three years Günter succeeded in doing just this, and in providing the evidence for the signal hypothesis that he was seeking, Günter’s two landmark papers published in the J. Cell Biol. in 1975 (5, 6) constitute a particularly beautiful example of the strength of hypothesis-driven investigation.

Following the 1975 papers, Günter attracted a number of highly talented international collaborators, with whom he worked out mechanistic insight into the signal-directed process and extended the concept of signal-mediated targeting to organelles other than the ER. To mention only few: Vishu Lingappa (secretory protein translocation and glycosylation), Peter Walter (discovery of the Signal Recognition Particle), Chris Nicchitta (membrane components for translocation), Reid Gilmore (identification of Signal Recognition Particle Receptor), Emily Evans (isolation of Signal Peptidase), Sandy Simon (the aqueous channel for translocation), whose work much contributed to the Nobel Prize assignment. Günter’s lab during this time was characterized by a high degree of enthusiasm and solidarity among students and postdocs. Günter bred a highly successful “school” of cell biologists, with whom he remained bound by supportive friendship long after they left his lab to pursue their own careers.

Since his time as a graduate student in Wisconsin, Günter had developed, in addition to his focus on the ER, an interest in the biology of the nuclear pore complex (NPC). At Rockefeller, alongside his research on translocation of proteins across lipid bilayers, he kept open a line of research on the nucleus, which constituted his main research effort from the mid nineties onward. Also in this field Günter gave fundamental contributions, from the discovery of the first protein components of the NPC and of the first transport factors that chaperone cargo into and out of the nucleus to the application of X-ray cristallography to study NPC structure.

Günter’s contribution to cell biology is not limited to the novel concepts on organelle biogenesis that he introduced, which are, today, taken for granted. It is, importantly, also in demonstrating the feasibility of reconstituting complex cellular phenomena in cell-free systems, an approach which has subsequently been extended to, and given key information towards, the elucidation of processes such as vesicular transport and ER Associated Degradation (ERAD).

Günter had wide interests in areas outside of cell biology, including literature, music and the visual arts. Because of his lifelong marriage to Laura Maioglio, he had a strong bond to Italy, and spent extended periods in Laura’s family home in Fubine, near Alessandria. After the fall of communism, Günter became committed to the rebuilding of the Dresden 18th century Frauenkirche, destroyed by the 1945 bombing, and to the building of a new synagogue, to replace the one burnt down by the Nazis in 1938; he donated all the Nobel prize money towards these causes. On the occasion of Günter’s 65th birthday, all those who had been associated with him met in Dresden. Günter personally guided us through Dresden and the surrounding country. His satisfaction at showing us the nearly completed Frauenkirche possibly matched his gratification for having demonstrated the signal hypothesis years before.

Those who interacted with Günter remember him as a passionate, generous, and highly unconventional person. While his direct manner of forcefully expressing his disagreements surely bred dislike among some of his colleagues/competitors, he was a special friend, colleague, and mentor for many others. Günter will be badly missed by those who knew him well, and will be remembered by the wider community of biologists for his pioneering work that opened a new era in Cell Biology.